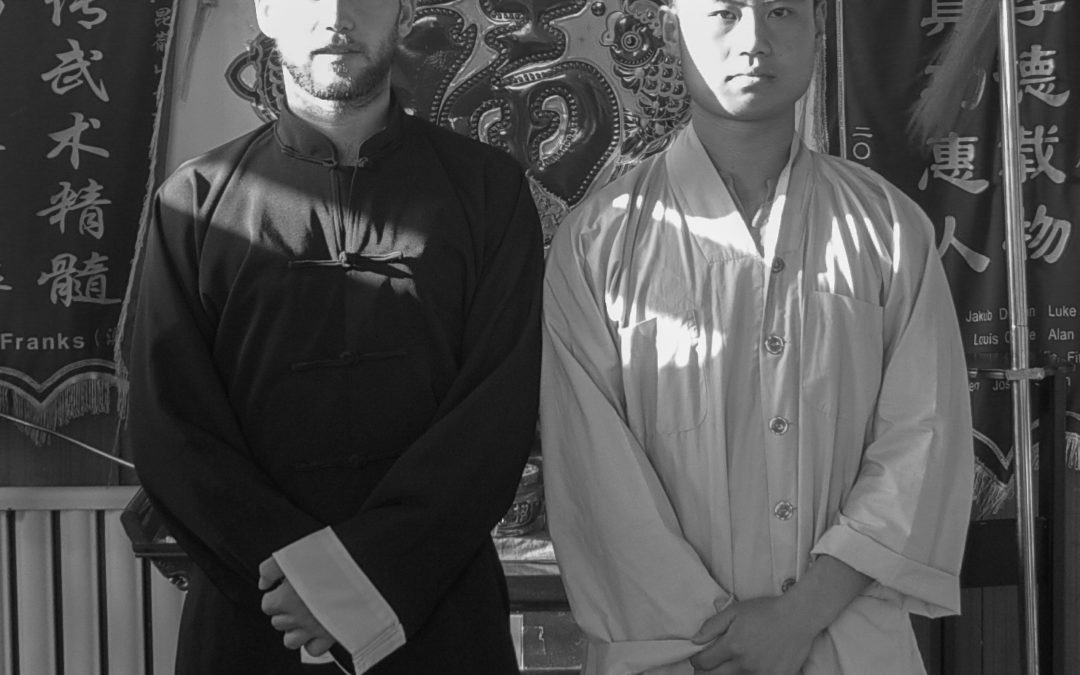 The tutelage of 34th Generation Masters

Two silhouettes illuminated only by the half moon battle it out right before my eyes with swords being wielded with speed and intent, sparks flying as the blades hit the ground as the two masters continued to work on their choreography of ancient kung fu weapons. Surreal, agonizing, progress, evolution, excitement, curiosity, intensity are just a few insufficient words I can muster up to describe what an inexpressible life changing experience training with genuine 34th degree Shaolin Kung Fu masters was.

All of the masters are real life super humans. All of them could perform what most would believe to be impossible feats of mind over matter. Their power, grace and perfect execution of martial arts forms left all of the student in awe. It was like witnessing an olympic level gymnast, mixed with the power and ferocity of Bruce Lee, combined with the calmness and certainty of a tibetan monk. Their traditional and ancient ways of training were brutal. Some tactics including punching and kicking trees, power stretching and getting kicked and punched very hard repeatedly to condition the body. If you didn’t hit your partner hard enough a shifu would happily lend a helping fist or foot. Their training methods were different but they were producing super humans and I wanted to learn everything I could!

I landed in Yantai and was greeted by a friendly face holding a sign on a small white piece of paper with my name on it, Larry the interpreter was waiting for me to take me to the academy. Being a martial arts practitioner my entire life I could hardly contain my excitement as the driver weaved his way through the mountains in China on route to it’s remote destination containing 34th generation Shaolin Kung Fu masters. Vivid memories of me watching martial arts movies as a kid are as clear as yesterday. Kung Fu masters and the power of martial arts had me hopelessly intrigued at a young age. Bruce Lee who has inspired and influenced me a great deal was another reason that I’ve been trying to manifest this trip my entire life. I have always been struck with a deep curiosity of what humans are capable of and more importantly what I am capable of and this was a place was where I could separate fact from fiction as well as test my own limits.

Nothing is impossible. I’ve spent a lifetime as a martial artist testing my own limits and trying to learn from those who can do the impossible. When I interviewed Master Guo featured above who could smash granite like nothing I realized that doing the impossible couldn’t be any more ordinary. Through dedication of practicing hard Chi Kung and Soft Chi Kung (energy work) over years he is able to achieve what most people believe to be impossible. There are others like him and we can learn from these incredible teachers. We have to suspend our disbelief and ask ourselves what would we willingly dedicate our lives for? What are we most passionate about? What would you do if you couldn’t fail? Do what you love most every day without attaching to the result to gain happiness or self worth. Self mastery is different for everyone. You can read more about my experience at the academy at mattbelair.com/Shaolin. Mastery is in the present, enjoy the journey but ensure you choose you’re aiming toward your dream destination. #motivation #inspiration #mindpower @ufc @zenathlete #sportpsychology @thenotoriousmma @robinblackmma @joerogan @aubreymarcus @lewishowes #martialarts #love #passion #wisdom

The Academy is set high in the Kunyu mountain range and features a breathtaking landscape of mountains and lakes. It was home to about 60 students and 10 masters responsible for shaping pathetic westerners into Kung Fu machines. The layout was simple with a massive dorm building, a dining hall, a large indoor training area, and several more training areas dispersed throughout the site. The Academy had everything a martial arts fanatic could hope for, Chinese weaponry everywhere, wing chun dummys, punching bags, unique, confusing Kung Fu training devices, areas for acrobatics, balancing posts, trees to punch, it was paradise! Stories filled the halls of the master’s feats of incredible strength, speed, skill and agility. Master Guo who I had the pleasure of interviewing and will speak about in length in a future article is a master of several martial arts including the ancient art of Chi Kung. With rigorous and relentless conditioning of his fingers as well as years of practice mastering the mind Master Guo is able to break a two-inch granite slab with only two fingers and I have the video to prove it! Furthermore he explained that in the past he has experimented with stabbing his finger forcefully through a glass window only to have the window remain in tact while leaving a finger size hole piercing through the glass as proof of his feat. I can only imagine after his first successful attempt he allowed the sweet breeze of success and pure awesomeness to seep through into his being. Every master had unbelievable grace, poise, and knowledge of martial arts. When the students had the pleasure of witnessing a simple demonstration mouths dropped and fists pumped as we gazed upon the greatest Kung Fu masters in the world.

You had the choice when joining the academy to focus on traditional Shaolin, Mantis, or Wing Chun Forms. I chose Shaolin because it was the most acrobatic and thought the skills learn would transfer to my snowboarding nicely. The training schedule and academy rules were strict and punishment for breaking them could result in a staffing, which was no picnic and led to serious bruising. It was like getting your ass handed to you by Donatello if you were the one who kidnapped Splinter. I trained Monday to Friday a minimum of 4-5 hours per day with optional tai chi and Chi Kung classes at the beginning and end of each day. I would regularly attend all extra classes, which meant I was doing 6 hours a day of training on average. My body was always exhausted and I was thrown to the wolves right away learning Kung Fu forms, Sanda (Chinese kickboxing), acrobatics, Chi Kung and more. . The worst day of the week by far was power training where each shifu (master/teacher) would have his own sadistic plan of pushing you far beyond your limits. This characteristic of the training is what set this experience of martial arts training apart from any other I’ve experienced across the world. To them it didn’t matter what your limit was, all that mattered was that they found it and forced you to go well beyond it. When you reached your breaking point your shifu would be ready and waiting with motivation weather it was a strong worded, simple english, “Come one!”, threat of punishment or further repetitions if you were forced to give every ounce of your being.

The following day, after your shifu broke you down physically there was another more torturous experience. This was another test of character that would bring many students to tears, literally. It was by far the students least favourite day, power stretching. Even now, writing these words my mind conjures up vivid memories of petrified faces, screams, sounds, and clear recollections of my own torture. The process was simple, students would grab mats for stretching and we’d all begin going through a typical series of stretches. We would be in a line in fear and willing our tendons to relax and stretch because we knew soon it would be our turn and the sound of agony would be our own. One by one down the line the shifu would not so kindly assist you in your stretch far beyond the realms of your capability and into a world of absolute misery. As he approached and you held your stretch, abnormally strong hands would grip the places necessary to apply tremendous power on your body and force your limbs to stretch further. Although I didn’t totally agree with this process and would have appreciated a more gradual procedure this was just another experience that proved that my body was capable of much more than I realized. Western sport science has taught us that this is not the correct way to stretch but good luck explaining that to them. They’ve been doing it this way for thousands of years and we wanted the real experience so we all sucked it up and endured the best we could.

Time passed as if days were minutes and weeks were hours, to say the training was tremendously grueling would be a grave understatement. The restaurant next door and the two neighbouring cities Moopin and Yantai were the student’s only solace from the weekly suffering experienced within the rock walls of the academy. Students would regularly make the 100 pace trek next door to discuss the days training, the masters pure awesomeness, and share cultures. This served as a much needed mental and physical escape, a taste of normality in an abnormal environment. The students who filled the academy were all unique, wonderful and driven people the fact they’d seek out this type of training speaks volumes about their character alone. Each individual had their own reasons for being there and I believe every one of them grew more than they anticipated. Many students became proficient in many forms of Kung Fu and could display their hard word exquisitely upon command, furthermore every person was willing to help and share their knowledge with anyone desiring to learn. It was a warm, loving, and kind environment. I now share a strong connection with everyone I trained with since few people will ever know what really goes on behind those walls, you naturally share a mutual respect for anyone willing to subject themselves to that type of painful experience in an attempt to better themselves and push their limits. I hold all the masters in high regard for their tenacious ability to master their craft and their willingness to show others the way. This experience was profound to me for so many reasons. The knowledge gained about my self and my own limits was profound but it was nothing compared to the empirical evidence that humans are capable of anything. I was able to converse, learn and experience some of the masters’ seemingly impossible feats. I know now more than ever anything is possible with time, patience, and dedication.

“No one is free who has not obtained the empire of himself. No man is free who cannot command himself.”  Pythagoras

You had the option to spar once per week on Friday’s. Here’s the first round of my first match. I don’t know why I felt it necessary to do a street fighter soundtrack. It took way more effort then anticipated but it definitely was worth it 🙂

Master Xu could smash bricks into a pulp. He also had a vicious one inch punch and we decided to trade techniques one day.

Master of Chi Kung and could break granite in all sorts of ways!